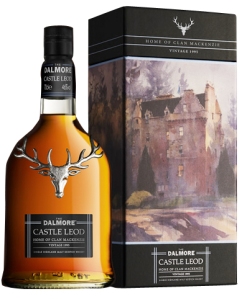 This Dalmore expression is the second in the limited ‘Clan Mackenzie’ series, after the ‘Mackenzie’ and before the ‘Cromartie’. This series was released as an hommage to the Mackenzie Clan, which is an integral part of the Dalmore history. This is another one of those Dalmore whiskies where Master Distiller Richard Patterson was able to ‘go nuts’ with his creativity and try to cook up a good whisky using all kinds of different casks. Best example of this is the King Alexander III expression, which really is a playground for different types of casks. This one ‘only’ uses three types; American White Oak which took the biggest part of maturation, Spanish Sherry Wood got the second stint and finally the spirit matured in Bordeaux Wine Casks for a period of 18 months. There’s no official age statement on the bottle, so one could call this a NAS expression, but a little research quickly tells you this is 16 years old.

Now I used to be a supporter of Dalmore. It was one of the first whiskies in my early whisky exploration phase and stuck with me for a long time. However, the more I got to know whisky, the more Dalmore refrained from impressing me. Especially the constant cask-mixing really wasn’t my thing. I still think that the 15 year old is a very good expression, but for instance the before mentioned King Alexander III expression really isn’t for me. Especially with the steep prices that Dalmore asks for its expressions it is not very accessible to ‘take a gamble’ and try a bottle. Bang for your buck seems wasted on this brand. However, the design of the bottles and packaging still charms me and there are moments I can really enjoy a Dalmore. So let’s hope this is one of those times. I have to say the colour is very inviting. A really good looking copper-reddish hue in the liquid. I don’t even care if it’s added colouring, this is just pretty.

Nose: Well the wine is quite clear at the start. It’s got that slightly bitter red wine aroma. Sherry notes, too. Some damp hay, wood shavings and berry fruits. I get blackberries and cherries. Clear chocolate and spice, light sulphur notes. Leather and something like rubber, weirdly.

Taste: Soft sweetness on arrival. Sherry is obvious, with some salted caramel and dark fruits. Quite a bit of oak, but not too sharp. Nice wine aromas, while things get a little more bitter now. Nutmeg, cinnamon and a little pepper. A big rush of fruits after that with blackcurrant and cherries, along with some other tasty fruits.

Finish: Medium in length with the blackcurrant still quite prominent, soft sherry and chocolate follow, spice, oak and malt wrap things up.

Overall: To be honest I was expecting a lot less from this. I’ve tasted it a few times before and it didn’t really impress too much. I really rather enjoy it now. The price tag of this whisky (a whopping €130) doesn’t help its case though. Not really worth that kind of money if you ask me. Still, I really quite liked it and since I’ve already lost the money, I might as well enjoy it.